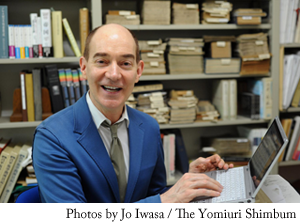 Mr. Robert Campbell, a Japanese literature scholar, says Yomidas Rekishikan, The Yomiuri Shimbun’s online archive, has proved an extremely useful resource for his research activities. A native of New York City, Campbell has been prolific in the Japanese media, writing for newspapers and magazines as well as working as a TV host and news commentator, for which Yomidas has also been indispensable. Following are excerpts from an interview with Campbell.

I’m a heavy user of Yomidas Rekishikan and turn to it at least twice a week. I look at Yomidas as one important “cultural capital.” A simple keyword search using proper nouns and general nouns generates extensive results. Failing to use such a treasure trove of data would be a waste. Rather, I feel I must use it.

My research mostly focuses on linguistic culture of the 19th century, up to the first half of the Meiji period (1868-1912), which covers broad areas including novels, poems and Sinological literature.

Japan’s governing structure underwent a drastic upheaval with the Meiji Restoration in 1868. Its social system also changed significantly through the creation of new social classes, namely the imperial family, noblemen, the warrior class and commoners.

Around the time when The Yomiuri Shimbun was launched in 1874, the lives and fundamental lifestyles of people in the town of Edo would not have changed much from 10 or 20 years earlier. By carefully reading newspapers printed back then, we can glean how people in the late Edo period (1603-1867) lived, what kind of things they loved, and how they used the language.

When I came across Yomidas Rekishikan for the first time, I felt like a bright light had suddenly been shone into a dark theater and illuminated the entire stage.

By reading short notices called “zappō” (miscellaneous news) in newspapers back then, we gain insights into many aspects of the lives of Edo-period people. For example, a performing art called tsuke-matsuri was one of the attractions in the Kanda Matsuri festival. It’s impossible to trace in chronological order what processes were used to decide festival programs using only Edo-period sources. However, in the Sept. 8, 1878, issue of The Yomiuri Shimbun, a two-line article states: “Discussions are under way to decide whether floats or jiodori dance should be included in the Kanda Matsuri program.” From this short article, we can assume that people might have coordinated their ideas about festival programs in this way back in the Tempō and Kōka years in the 1830s and ’40s.

It is my theory that many aspects of Edo culture reached their peak in the first two decades of the Meiji period. People tend to think this was a time of drastic change, but ordinary daily life seamlessly continued from the Edo period.

Many newspapers were inaugurated around the time when The Yomiuri Shimbun was launched. I think it’s fair to say Japan was among the first non-Western nations where newspapers took root. Yomidas Rekishikan is significant in that we can use, read and search articles written in the language of this country at that time.

When searching stories in the Meiji, Taisho and Showa Eras section, I recommend reading through the entire results page, instead of only reading the story you searched for, which will be marked with a red thumbtack. Doing this helps uncover the atmosphere, tastes and people’s sensitivities at that time. Reading articles will enable you to grasp what constituted common sense, norms and people’s concerns and formalities.

To understand literary giants from the Meiji and Taisho periods such as Natsume Soseki and Mori Ogai, you have to keep honing your skills so you can attempt to stand on the same stage as they and relive what they experienced. Ogai contributed many columns to The Yomiuri Shimbun. By reading these columns, we can understand in what context the first form of his works (contributions) were received by their first readers (readers of the newspaper).

One thing worth remembering is that The Yomiuri Shimbun maintained a principle of using zokudanheiwa (colloquial language used in daily conversation). It was one of the so-called koshimbun (small format newspapers) that used the unified form of the written and spoken language. It printed hiragana beside all kanji characters to show how to read them, and used a colloquial style that was easy to read, for the purpose of making newspaper articles more understandable to the general public.

In the early Meiji period, newspapers were comparable to textbooks and supplementary readings. Hiragana readings beside kanji helped people read difficult kanji and understand new issues. In this connection, we researchers are also interested in how newspapers enlightened the public by helping people acquire the ability to properly and correctly read Japanese through reading newspapers.

I first became aware that newspaper databases are useful for my research when I started using The New York Times Article Archive. The online database allowed me to locate places the Iwakura Mission of statesmen and scholars visited during their stay in the United States for more than six months in the early 1870s, and to recognize how they were viewed in the eyes of Americans. While I was studying this topic, Yomidas Rekishikan was launched in 2009.

I’ve focused on Ginza as a research theme in the past two or three years, and I am now writing a series of articles titled “Ginza Bungei no Hyaku-nen” (100 Years of Literary Ginza) for the bimonthly magazine Bungaku. My research covers the period from 1872, when brick buildings began appearing in Ginza, until the mid-Showa period (around1955-1960), just before Japan’s rapid economic growth period.

I’m reading many novels set in Ginza and verifying whether the Ginza described in the novels really existed. One example is a series of novels featuring women in Ginza by the author Niwa Fumio. The Yomiuri Shimbun is extremely useful in this regard.

After the Ginza conflagration in the Great Kanto Earthquake in 1923, provisional wooden buildings were constructed one after another in the area. With extraordinary designs and colors, these buildings were amazing. But many were soon replaced with solid modern buildings and disappeared in only one to two years.

These unique buildings were captured in The Yomiuri Shimbun’s series of articles titled “Barakku Kenbutsu: Kasō no Ginza to Asakusa” (Observing barrack buildings: Ginza and Asakusa in disguise). For the series, sculptors Saito Sogan and Hinago Jitsuzo walked up and down Ginza-dori avenue and wrote analyses of these provisional buildings. Among them are such well-known places as the Jujiya Musical Instruments Store, Senbikiya Fruit Parlor, Shiseido Café, and the Lion and Café Kirin buildings.

Tokyo was rebuilt in about seven years after the Great Kanto Earthquake. Comparing novels written during this period and the Yomiuri articles on provisional architecture, the novels, which I once read without knowing much about the landscapes portrayed in their pages, began to come to life and feel more real. The authors’ hidden intentions also were revealed.

The Heisei Era section, which contains articles from 1986 onward, is a useful tool that I use for making comments on TV and writing contributions for newspapers and magazines. For example, when the Tokyo governor was coming under fire over a political funds scandal in 2016, I looked for articles while wondering, “This person is saying such-and-such now, but how did past Tokyo governors use political funds?” You can also examine recent events such as what pledges politicians made during election campaigns. I believe newspapers are essential tools for drawing out specific facts.

I hope more people come to see how interesting Yomidas is, and by using it to become more aware of its value. At the same time, I’d like its keywords to be upgraded in order to make the Yomidas database even more easy to use.