Commemorating its 140th year of operation, The Yomiuri Shimbun has added a Regional Sections (Showa Era) feature to Yomidas Rekishikan, its online archive. In this optional feature, scans of 2.76 million regional news pages dating from 1933 to 2001 have been added to the archive, bringing an intimate view of local events, budgets and election results of local governments, and human interest stories about local celebrities.

Strong interest in the local community 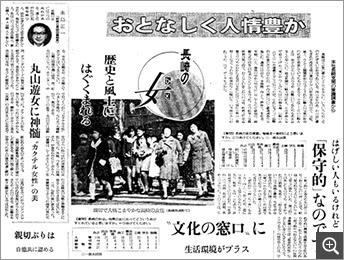 Examples abound of articles which captured the imagination of the community, or proved to be a forerunner of national events. In 1972, the Nagasaki Bureau ran a year-long series titled “Women in Nagasaki”, including an opinion poll showing that Nagasaki women are quiet but have a big heart.

On Nov. 15, 1973, the Yamaguchi Prefecture edition reported on the opening of the Kanmon Bridge linking Japan’s main island of Honshu with Kyushu. The comments of prominent local citizens express their excitement at the prospect of improved access to the heart of Japan.

A microcosm and a harbinger

Hindsight often shows us that a local news story reported on a harbinger of social issues with a national scope. On New Year’s Day in 1971, the Kanagawa Prefecture edition ran a story predicting that the rampant rise of automobiles, buildings, apartment complexes and factories would result in air, water and soil pollution causing serious threats to public health. The first installment of a new series titled “On the Increase! On the Rise!” visited a public elementary school in Yokohama where the student enrollment had seen an explosive eight-fold growth in nine months as a result of rapid urbanization in the early 1970s.

Compared to the articles appearing in the national news pages, readers find the local news stories are more immediate, accessible and easier to relate to. National news stories provide a bird’s eye views of current topics, while the Regional Sections home in on local communities throughout Japan.